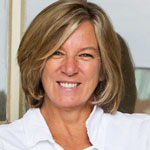 Rebecca received her BA and MA from UCLA and completed her doctorate in German at the Ohio State University. She joined the Wake Forest faculty in 1993 after beginning her teaching career at Georgia Tech and Georgia Southern Universities. She loves teaching all levels of German language, literature and culture.

Rebecca has spent significant time living, working and studying in Germany and Austria. As an undergraduate she held an internship in the Bavarian village of Bad Feilnbach; as a graduate student she studied at the Freie Universität Berlin. Since 1988 she has served on the summer faculty of the American Institute of Musical Studies (AIMS) in Graz, Austria; she has served as Resident Professor of the Wake Forest Flow House semester abroad program in Vienna for two semesters and short-term summer programs; she is taking on the role of overall Program Director for the Flow House as of July, 2018. In addition, she has led numerous study abroad trips for undergraduate and adult learners.

Her primary research area is modern and contemporary Austrian literature and culture with a particular focus on the Post-Waldheim era and living Austrian authors. She has given papers and published on Elfriede Jelinek (Nobel Prize, 2004), Doron Rabinovici and Kathrin Röggla, among others. She is also conducting an interdisciplinary research project that evaluates the how a survival communication training module she has developed affects psychological and intercultural adaptation in sojourners abroad. She will be presenting the findings of this research at the CIEE conference in Barcelona, Spain next fall. Finally, she is working on a comparative study of the documentary fiction of Kathrin Röggla and Errol Morris. The study examines the relationship and current status of facts, truth, fiction and reality.

Rebecca loves traveling anywhere English is not spoken and brazenly breaking down a phrase book. She enjoys Alpine hut hiking, plinking on the piano or guitar, cutting stained glass for mosaic art, cooking with hot spices, learning new things and laughing out loud.